Alternatives to fireplace as psychological center of home

You agree not to post any abusive, obscene, vulgar, slanderous, hateful, threatening, *-oriented or any other material that may violate any applicable laws. Doing so may lead to you being immediately and permanently banned (and your service provider being informed). The IP address of all posts is recorded to aid in enforcing these conditions. You agree that the webmaster, administrator and moderators of this forum have the right to remove, edit, move or close any topic at any time they see fit.
Post Reply
156 posts

Perhaps it would be comforting to read what was written a half century ago (more or less -- anybody care to take a guess ?) as the text to the abbreviated picture gallery of fireplaces in the previously-cited House Beautiful piece:

"Almost no one really needs a fireplace nowadays, but almost everybody wants one. Ninety-nine nine percent of the new houses' built to sell for over $15,000 have fireplaces, and half the houses that sell for $10,000 have them too. Even the most uncompromisingly modern architects who measure everything in terms of functional necessity make a sentimental concession in regard to the fireplace. But they have devised new ways to place and new ways to design them. Though its appearance has changed and it may be round as a ball like the one designed by Edgar Tafel or look like an Oriental version of a Franklin stove or be a pit with a vast hood, the hearth is still the symbol of the home.

"Many modern houses are so tightly built, with weather stripping, storm doors, modern insulation, that they need special outside fresh air intakes to create drafts that make an open fire burn. The flue is the secret of a good fireplace, must be a tenth the size of the fireplace opening. There need be no smoke where there is a fire if the fireplace is properly designed. If it smokes it may be because the chamber is too shallow, the flue too small and lacking a smoke chamber, or because the damper is inadequate. For the most part, now that the fireplace is less important as a source of heat, it is better engineered and more effective than ever."


I note the "smoke chamber" so labeled in the Sweeton fireplace section drawing [previous page]. . .

The above seems as if it could have been written last week (except for, course, the prices...) 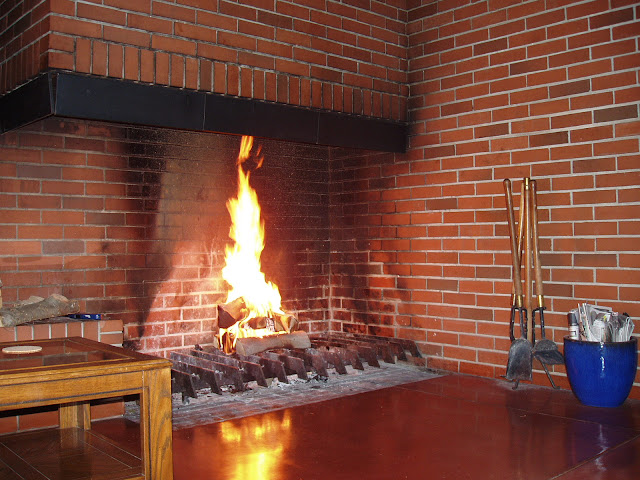 I just noticed something when looking at this photo of the Schwartz House, completed 1940: The back and sides of this fireplace opening are a continuation of the same brick used throughout the house. I have a feeling that this is what Wright preferred. He specified that on our Lamberson drawings, but it was built with the larger tan colored firebrick. Was this possibly an inevitable concession to building codes? I notice that almost all of the later fireplaces use firebrick inside the opening even if it is a continuation of a wall plane. The Malcolm Willey opening is standard brick...

I went back and looked at Tnguy's excellent photos of Usonian fireplaces, (page 7, this thread) and the only one which continued the wall bricks into the opening was Muirhead 1951, (looser building codes for a farm house in rural Illinois?...)
Top

I have no doubt that any architect would prefer the continuation of material, in a design like so many of Wright's. Better to build the whole house of firebrick, for the sake of that continuity. . .!

peterm's note about the standard brick vs. firebrick was mentioned by Herbert Jacobs in his "Building With Frank Lloyd Wright" book. In Jacobs1, FLLW insisted on using standard cull brick from Johnson Wax in the firebox, apparently for unity of appearance. After a couple of years, the brick at the base of the back wall was deteriorating to the point that a breach would be imminent. An apprentice was dispatched by senior apprentice to remove the deteriorated brick and replace with the firebrick..with the explicit instructions to have a fire right after curing to blacken the yellow brick so as not to arouse FLLW's notice if an impromptu visit occured.
Top

The masonry of the hood is subject to arching action of course, and I find that a 150 x 90 x10 mm angle iron is adequate for quite large openings, even when cantilevered. With bolts set in the footings, passing thru short lengths of pipe welded to the back of the angle and secured with washers and 2 nuts, sufficient counterweight is created to resist the overturning moment. The damper, custom made, and welded up from 5 or 6 mm steel plate, has its back and front flanges set in the bed joints immediately above the top edge of the lintel. [The ends of the damper have no flanges, and are not built in]. This ensures that the throat of the damper is as close to the fire as is feasible. Having computed the necessary width of the throat, it will become obvious that both the inner face of the hood, and the back of the fireplace, will have to slope in order to meet that requirement, as will the front and back faces of the damper. The top of the damper will be level with the smoke shelf.

I'll measure the existing conditions of the Sweeton house firebox and smoke chamber and compare.
Top

The weaving of standard brick and firebrick, as at the Lockridge Medical

explains the appearance I noted at Fawcett

where the standard brick is apparently kept painted, while the firebrick is black with soot. . .

At Fawcett, there is a distinct change of planes at the firebox and the block walls of the house appear to have been painted. In fireplaces where the wall plane continues directly into the firebox, this becomes problematic, (at least we can assume for Mr. Wright...) because not only does the color of the material change, but the module, because unless custom fired, the firebrick is of a size that does not correspond to the module.

To solve this problem at the Malcolm Willey house, Stafford and Steve Sikora had custom firebricks made to the size and the color of the original standard wall brick when replacing the damaged fireplace brick and restoring the Willey fireplace. This is a good example of the attention to detail that occurred in the restoration.

SDR- It looks like Lockridge uses firebrick of the same size as the wall brick allowing for the "weaving"...
Top

Yes -- though the Fawcett house (whose major material is painted CMU) presents the additional issue of painted (brick) in the fireplace having to weave
with (unpainted) firebrick (?). . .

The Willey restoration tactic represents the ideal, I would think.

DRN selects three of the fourteen pages on fireplaces found in the seventh edition of Ramsey/Sleeper's "Architectural Graphic Standards"
(Â© 1981, John Wiley & Sons). I have scanned them at just over full size.

peterm wrote:.... the only one which continued the wall bricks into the opening was Muirhead 1951

I think Christian (Samara) may have continuous wall brick in the fireplace, too. See: this photo and this one, too. (I believe the 'lighter' look on the right side of the fireplace is due to the light from the 'heat lamp' being turned on).

Also, though it is tough to tell from this angle, I believe Krauss may be continuous brick, as well.

Of TVs and Fireplaces

I realize I am weeks late coming into this post and that the discussion has veered between several subjects...but...

When visiting with Elizabeth Richardson (Mrs. Stuart Richardson (1940, Storer 282)) in the mid-1960s, she brought up the subject of television. The Richardson living room is a large triangle, supported on a triangular brick pylon at each apex. One is the fireplace (relatively "normal" opening size; one is the utilities closet; and one is an open "V" with bookshelves, skylight over.) She said "Mr. Wright of course knew when he designed the house that television was coming, and this niche was intended for that. Of course when TV came out and we saw what a horrible squawking intrusion it was, we would never put a thing like that in the living room. So small library it remained.

The house also has a second fireplace in the master bedroom, also in a similar triangular brick pylon. She said, "Stu and I insisted that we have a fireplace in the master bedroom. Mr. Wright advised against it and said we would never use it but he gave it to us anyway. We used it once when we first moved in and we almost died of the heat. We never used it again." In the 1960s, it was used to store Christmas ornaments, with an indian blanket hanging over the opening.

In reviewing my 1960s slides I note that the bedroom chimney does have a metal ductwork extension extending above the brick. This may have been one of a number of "improvements" to Wright's design suggested by family and contractors during construction, to assure it would draw properly. I don't know. The main living room chimney has no such extension, and the fireplace did not smoke.

I also recall at Cooke (Storer 360) there is a masonry extension on the chimney, undoubtedly to help that large corner fireplace draw.

In my own experience when I purchased a house with a soot stained fireplace, the local fireplace doctor suggested a cheap simple solution - a galvanized whirligig at the top of the chimney stack, which sucks air out like crazy.
Jim
Top

A very late post. I'd like to bring up the CHIMNEY. Form followed function, or visa versa, in his Prairie houses, because the huge chimney contained not only the small flues but also vents for the attic, and at Graycliff for the dirt floor crawl space. Clever. Do the large Usonian chimneys serve a function other than to carry the flue?

Approaching the houses, one sees the huge chimney and so anticipates the hearth. This foreshadowing might have something to do with the placement of the fire box--the fireplace as destination more than a source of heat.
Top

Re: the current heart of the house. I say it is the kitchen, whose oven (and coffee maker) give off heat. They are the most modern or Wrightian room in most houses: the horizontals of the counters; the modular design of the cabinets, and their human scale; the window with the garden view; perhaps a door to the lawn; water near "fire"; and the hum of the fridge in place of the crackling fire... I think it is the sense that the kitchen is the heart of the house that makes people uncomfortable these days with the connection of kitchen and garage, and explains the desire for a buffer space between them in the form of a "mud room". It also explains the desire to eliminate the buffer of the dining room between kitchen and living room.
Top

Ablin's chimney incorporated a bulky swamp-cooler system, the best solution in those days for such a hot climate. I don't know if it's still in use.
Top

Wright often raised the roof over the kitchen, and provided a means for ventilation to take place (remote-operated clerestories lites ? Other ?). In a number of houses the chimney mass is expanded to include the kitchen mass, so that the appearance from outside matches the description given above. Lamberson is just one example of this type . . .

What is a swamp cooler system?
Top
Post Reply
156 posts